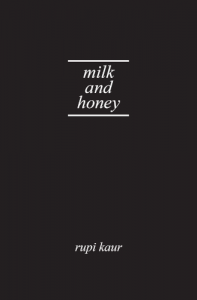 Rupi Kaur, a Canadian writer, poet, and illustrator, creates in her own style that helps broken people find strength and withstand the worst moments in their lives. She encourages hopeless readers, who suffer from loss, pain, trauma, migration, and other sorrows, to transform their heartache into something beautiful.

The name of the book comes from some poem about a woman who survives terrible times. She changes and becomes “as smooth as milk and as thick as honey.” Sweetness can be found anywhere if you want to see it. Trying to explore people’s souls, the author comes too close to the understanding of their problems and finds a connection with her readers. This makes Rupi Kaur so popular.

If you are interested in books about family relationships, read The Glass Castle review. This family saga from Jeannette Walls is a memoir that describes the life of difficult parents and their kids’ upbringing. 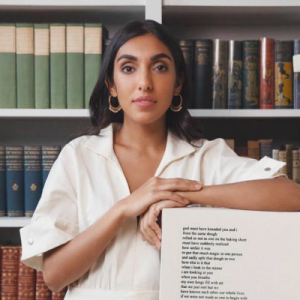 Born in India, Rupi Kaur immigrated to Canada with her parents when she was 4. At the age of 5, she was inspired by her mother to paint and draw.

In high school, she started writing and shared her poems and illustrations on Instagram. In 2015, she posted a series of eccentric photographs described as visual poetry. They were a part of her undergraduate project. The provocative photos were removed by the website but afterwards brought back.

In her poems, Kaur continues to explore themes that seem too personal and are considered as social taboos. As an internationally acclaimed poet, she finds a response in readers’ hearts and is warmly accepted by the people who value her direction in art.

The author breaks her book into 4 parts and gives them the following names:

Each section heals a different kind of pain. Here is a summary of the book with a description of each chapter.

The first section has a black aura and starts with the topic, which is hard to perceive. It touches the themes of sexual abuse and family relationships. Rupi Kaur describes physical pain of a girl who was raped and what destruction this caused to her childhood. She depicts this as a chilling experience and shows the female struggles in overcoming this issue.

In the next chapter, the tone of the book shifts, and a read becomes more uplifting. The poems are more sensual and idealistic. They feature both emotional and sexual pleasure that the couple feels when two loving people are together.

In “the breaking,” Kaur describes the dark times in the life of any girl and what she endures when a long-term relationship with a boyfriend breaks up.

The last section is recommended for abandoned people who have gone through heartbreak and yearn for some comfort. It encourages them to seek out the power and beauty within themselves. This chapter empowers to love and value one’s identity and independence regardless of the pain these people have faced.

This is a synopsis of the book. It is important to note that the poems are aimed not only at the female audience, but they also get the reflection in various people.

Read this review of We Were the Lucky Ones, a best-seller from Georgia Hunter. You will learn more about the life and survival paths of ordinary people during World War II. The novel is worthy of your time. 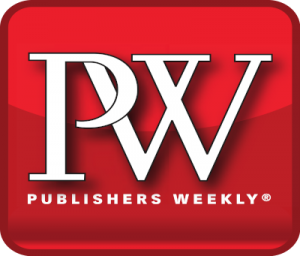 Milk and Honey is a short book, but it includes a strong message and remains very popular due to the author’s Instagram posts. Rupi Kaur has a lot of followers on social media, and some critics call her work “instapoetry,” a new genre in modern art.

This cannot be accepted as a high appreciation of her work because “instapoets” are considered as the authors who rise their fame using social media as leverage.

The associate editor and journalist at Publishers Weekly John Maher stated that poetry sales figures indeed increased in 2017, but that happened 2 years after Rupi Kaur published her book.

Her debut Milk and Honey book was self-published in November 2014, after Kaur completed her degree in rhetoric studies. In 2015, it was professionally released once again by a Canadian publisher. With tremendous success, more than 2.5 million copies of the poetry collection were sold.

The poems quickly made their way to the worldwide recognition due to their relevance in modern society and artistic simplicity. It was translated into more than 25 languages. For more than 77 weeks, this piece of writing has remained on the New York Times Best Seller list.

There are more than 76 editions of the book, both hardback and paperback. They are rather cheap, and the price depends on the type of their cover. You can buy its copies in regular shops or order from online stores (Amazon, Walmart, eBay, Target, etc.). Milk and Honey is also available as an audiobook as a low-cost variant of reading.

The Artemis book review is a must-read for everyone interested in science fiction. Expect to see thrilling adventures with Andy Weir’s protagonists set on the moon.

This is a hardcover edition with a portrait-oriented text. It counts 226 pages and includes a woven ribbon marker. Milk and Honey has a foreword written by the author.

Rupi’s own illustrations add a personal touch and an illusion of her presence in every poem. It seems as if you were reading a diary of your friend. The hand-drawn illustrations are a little whimsical and tend to distract the reader from a troubling subject. Preview the book before giving it to teens: some pictures are uncensored. 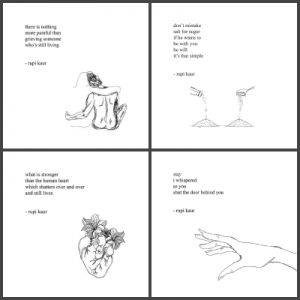 The cover of the book is black and features only the title and the author’s name written in white. The first pages that include the contents are also black.

The author writes the poems in lowercase. In her mother tongue, Punjabi, all letters are equal, and the only punctuation mark is a period. Kaur breaks the rules of writing traditional poetry: she deliberately uses small letters and creates punctuation mistakes. With her own style, she honors her Indian culture and symbolizes that every letter in her poems has the same power.

This collection of poems is described as simple and easy, and it has high ratings among readers. Kaur wrote that she drew inspiration from Sikh scriptures.

She was also inspired by an African-American poet Nayyirah Waheed, who became famous on Instagram for her poems about identity and love. Nayyirah Waheed accused Rupi Kaur of plagiarism, but Kaur denied the charge. Still, some critics find the style of both poets with their lines breaks, imagery, and punctuation very similar.

Your furniture and lighting should be perfect to enjoy reading a book. Nothing should distract, and stop you from immersing yourself in the world of a masterpiece. Therefore, we recommend to look at the Microsun lamps review to make reading comfortable.

Some experts cannot classify Kaur’s poems as poetry because most of them don’t have rhymes. They are just poetically written lines broken by clicking “Enter” after a few words. A number of critics consider Kaur’s success overrated: to every good review written about her poems, there is a bad one.

Despite negative reviews, a lot of readers understand Kaur’s poems and adore them. The release date of her second collection was on October 3, 2017, which again became a #1 New York Times best-seller. Kaur’s followers have already benefited from her long-awaited The Sun and Her Flowers.

Her books are told to take desperate people into a therapeutic journey from pain to eventual healing. Not sugar-coated, her poems describe trauma as it is, and this brings them to a new artistic level. Who knows, maybe they can help you, too.